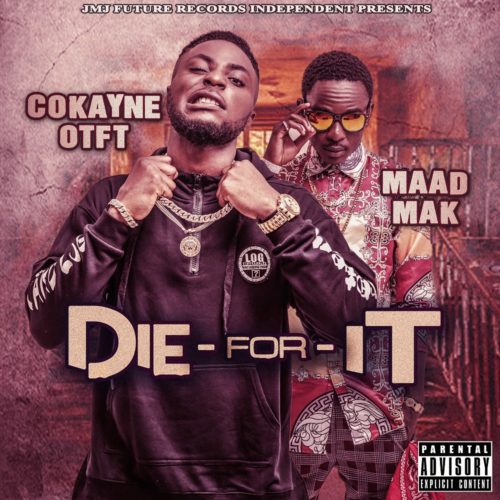 Cokayne OTFT born TCHEKOULONG BIENDA Fabrice on September 29th 1992, is a Rapper, Record producer and Mix Engineer from Cameroon. Revealed to the scene in 2013 through his single “On My Way”, he has been of great contribution to Cameroons’ Hiphop scene through his productions on some well known tracks such as the original version of the massive hit “Tumbuboss” for “Stanley Enow” another Cameroon native and others in the like of “Dareal” in “Ova Njoka”.

Today Cokayne OTFT has already released a couple of songs. Some of them are Up n’Down, On My Way, A Moute and recently More featuring King Kong Gorilla Stanley Enow Also some collaborations such as SOUL, Proud Monkey featuring local artists and label mates “Van Blaze” and “Lekyd”.

In More Cokayne OTFT told us he is not ready to retire and today he brings in another banger “Die For It” in collaboration with “Maad Mak” recent JMJ Records Independent signee. “Die For It” shows the passion for what we do no matter the huddles, trials and tribulations on the way.

Share the wave, because he is just starting and as he says in this recent release, he is not ready to retire.

The new jam comes with a Lyrics video, Watch and sing along